This article is part of a series that aims to build a system to send notifications of relevant articles of Twitter, with the purpose of being easily retweeted. Here is the complete article.

I’m going to do a summary of what we’ve seen on previous posts.

So far now we have to:

Because of that I’m going to do everything in different steps trying to be as understandable as possible on each one.

This post assumes that you read previous posts related with SimpleRTApp project, in a way you can understand the next files and the design we have now.

Regarding technical requirements, we would need a bit of knowledge about Node.js and Swift for the iOS app.

The idea, at the end, is to have a script that we could run in a certain frequency (let’s say, every 6 hours for instance) and it send the selected tweets to the users

To do that, we have to create this script so we, simply running it, it find the tweets and send them to the users

We’re going to create a new file send_tweets.js with the following code:

So on terminal we can run node send_tweets.js with the following result:

_Note: It ‘s important to verify with SequelPro that we have a real device token in our data base, other way we won’t be able to correctly test the script.

As we can see, we show the device tokens and related hashtags for every one. In my case I have just one on the database.

Do you remeber our post about Twitter Search API with Node.js? Well, it’s time to use it. We open relevant_tweets.js and we change its content so it can be used from other file:

With this we can access to these utilities from send_tweets.js:

In console, the output will be:

This is the last published tweet with these hashtags.

Now we have to send this information with a push notification, from our server. In a similar way we did with the tweets helper, we do it with our script send_push.js:

We export a sendPush function which accepts deviceToken , tweetText and a tweetId.

Something to say is that we add on the payload the tweetId, since we will need it on the app to retweet it.

We add the sending pushes feature to our script send_tweets.js and it’ll be something like this:

We adjust a little the callbacks, and we use the notificationsHelper (which uses the functions on send_push.js)

Finally, we test all our logic and see if the push arrives to our device. We run node send_tweets.js on terminal: 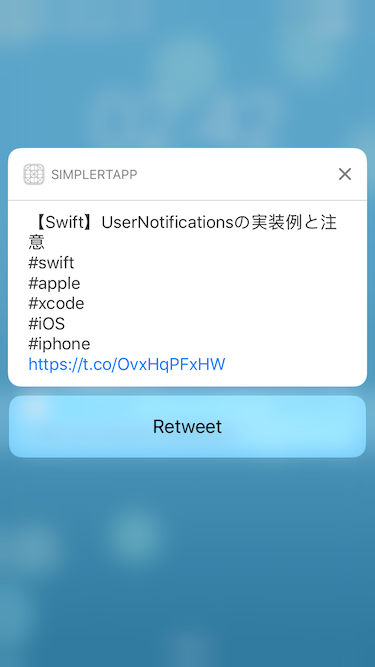 Great! We have set our script on our server.

Now we have to implement the needed logic to manage custom actions inside the app. To do that, we create a class PushNotificationsActionsHandlerwhich will be in charge of the pushes actions related logic:

Basically it inits with a UIWindow object to have access to app navigation. After that we implement a UNUserNotificationCenterDelegate to know when user taps on a custom action. Finally, if it was a retweet type, we open RetweetViewController with the needed data to do the automatic retweet.

To be able to use this class, we need to instantiatee it on AppDelegate. We create a PushNotificationsActionsHandler and add the following lines on didFinishLaunching method:

Later we change a bit RetweetViewController to accept the new retweet logic when it loads:

We build the app to have it update on device. It’s important to be logged on there with Twitter.

We go to treminal, run node send_tweets.js, receive the tweet, we tap on retweet custom action, and we can see how it opens and does a retweet from the sent tweet. We enter to Twitter to check the action: 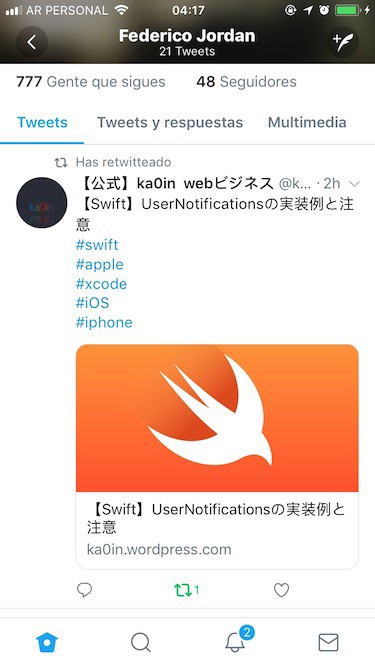 It worked! We now have our system working. It’s enough to run node send_tweets.js on terminal, and it will send a push notification with the last published tweet with these topics.

You can see the final code on the tag retweet_from_custom_action.

The last task to do is to deploy it on some server so it can be executed between some time. It’ll be related on the next posts.

This article is also available on Medium